Did you receive in the mail last month the attached letter and Time & Talent sheet? Here it is attached for your convenience, just in case it was missed, lost, or eaten by the dog.

️
If you have already returned your 2020 Tithing pledge to our treasurer, Mark McQuide, or if you are a distant friend receiving this email in error, THANK YOU and please disregard.
Otherwise, this is a friendly

gentle reminder of the due date

God bless and thank you kindly! 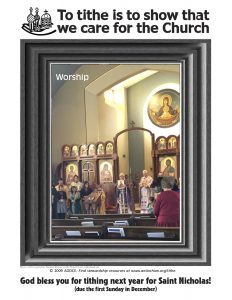 Attention parish members, friends, and guests! You are cordially invited to dinner and a show hosted by members of St. Nicholas Orthodox Church, on Saturday, evening March 5, which is the eve of Meatfare Sunday!

If you can, join us for Vespers at 5, dinner at 6, and the show following!

Come one, come all! Join the fun!
Note: this is not a contest!

This is a Saint Nicholas Fun Raiser for charity!

Support St. Nicholas — get in our Talent Directory & Program Book!